My Cup Runneth Over

Somehow, in one way or another, I end up writing (even if in brief) about coffee in my blogs.

This is a habit (not just the writing, but drinking) for a lot of writers, because it really may be the only thing keeping us in our chair -- trying to do what we were called to do -- but suffering horribly at times because of that enormous wall called “writer’s block.”

But this post isn’t about walls, and blocks and such. It’s again, about the coffee. Did you know that Swedes (as in the folks of Sweden) are the highest coffee drinkers per capita in the world?

My maiden name is Swedish, even though I’m a mix of all things European. And a whopping ¼ of me is Finnish. Though Finland isn’t Sweden, it IS next door to it. And I think that counts as a good explanation as to why I love the black gold so much.

This picture is of my most favorite coffee mug in the world. My blog friends Erica and Christy are having a blogfest about coffee cups today. Each blogger is supposed to post their favorite cup and why it is their favorite. That's pretty darn unique and clever of them -- not at all like my cup. 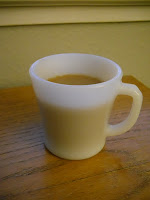 My mug is simple, a lot like me. There are no frills or fluff. Not that I’d mind a frill or two. But, you know what I really love about this cup? The size. It’s not 8 ounce or 10 ounce or 20 million ounces. It’s only 6. It holds just the right amount of coffee and I can drink it in the right amount of time before it gets cold. A little half and half, and I’m really doing great.

The thickness of the cup is key too. Not too thin, not too thick, just right. I think the coffee is actually better from this cup than any other in my kitchen. No really. It truly tastes better.

This cup is from the 1950’s as well, so we’re talking vintage here. Called Fire King, and made by the Anchor Hocking glassware company, this is not just a mug -- but a treasure. And I’m taking care of it. I’d like to believe this cup is taking care of me too.

The third resolution from my New Year's post is for all of us to have our writing “be just what the editor was looking for.” With this cup in one hand, and my other on the keyboard, I’m bound to keep writing -- and rewriting-- to where this (an editor fawning over my words) is an actuality. I may have to put the cup down for a bit to work both my hands. But hey, that’s good too.

Blood, sweat and coffee (or maybe for you, it's tea or something else.) This is what writing is all about! And when I am in the midst of my work, I really do feel like my cup runneth over. Running over with coffee, ideas and blessings.