M is for Masterpiece 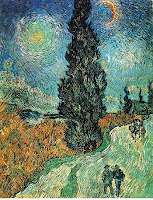 As a writer, it's easy to lose sight of the big picture.

I'm sure this is a common theme for any artist -- from painting to acting to dance -- as they have to daily focus on small segments, perfecting those parts, which in turn creates the final masterpiece ... even if it takes many, many days.

Writing is the same way. We work a chapter or page at a time. But, after months of this, sometimes we don't remember the passion; what it was that sparked imagination or flamed the fire of this story.

Sometimes, we need to reread what we wrote to remember. Other times, we have to sit on it. And usually, we just have to keep doing what we're doing, one day at a time, having faith that the final project will appear.

Masterpieces don't come over night. They don't even come in six months or a year, sometimes. It requires our patience, daily or hourly even, to keep steadfast in the art and steadfast in the continuity.

It takes persistance in going into the characters and the setting of an unreal world and maintain a belief in that world, despite what's going on around you, which ultimately carries over to the reader.

Isn't that the whole point?

Making a masterpiece -- something you are truly happy with -- takes work and time. Don't rush through it; don't think you'll never get it finished; don't try to short-change yourself and slap it together just to have something completed. It won't be good. It won't be that masterpiece you want. No one will care to read it again, or even read it in the first place

It's quality. Not quantity.

Stick with that, and everything you churn out, even if it takes five years, will be worth it in the end.