S is for Sparks 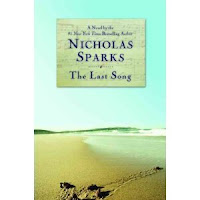 As in Nicholas Sparks. I know what you're thinking ... we've already heard about this guy. But, probably far less than you're hearing about Suzanne Collins of The Hunger Games, right?

I know a lot of people like his writing. I know a lot of people don't like his writing. Usually, the latter group says this because they've never read any of his books. They're only basing their opinion on what others have said, what they've heard in an interview, or how bad they thought the movie was. Don't base your judgement of a book from the movie ... ever. You know the cliche: The book is better.

1. His writing is real. I know. Some of you guys are thinking, come on, he's so not real. But he is! He's real for guys and girls, and on so many levels. I just read The Last Song. Sure it was sad, as he usually has sad elements in his books, but how is that any different than other book? Life is about sad. But it was also positive too. His male characters aren't all good-looking, sweep-you-off-your-feet guys either. They work, they have faults, they learn how to love and how to protect. His female characters have just as many faults too, which makes for a great story. This particular book isn't just a love story. It's about discovering the truth to each character, revealing what has been hidden, and getting rid of the things that have hindered their lives from growth. All good stuff. Most of his books are about friendship and family; what life is all about. His writing is real so we all will relate.

2. He knows how to tell a story. If you're not going to read his works because you hate the genre, then do yourself a favor and read one of his works to get a feel for how he weaves his stories. He hooks you from the first few chapters. In the past, I've read a few of his works that seemed slow to start. But this book, The Last Song, got me from the start. He even got me to care about characters I didn't want to care about. That's a good story teller. He doesn't overwrite his stories, either. His editor actually makes sure that all he puts in the story is truly relevant, not just something to fill up the pages. Some best selling authors have fluff in their books. That's so not cool. Just ... fluffy and unfulfilling. Sparks is a bestseller for a reason.

I suppose I'm an advocate for him because he's also from Sacramento, where I live. Maybe there's something in the water that will teach me how to write as well as him too.