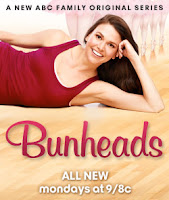 Wow, such an incredible title. I know. But, that's sort of what this post is about. Bunheads and stuff.

What is Bunheads? Just the newest and wittiest show around. If I'm not mistaken, this show was written by the writers --or at least some of them-- from Gilmore Girls. If you saw that show, then you'll love this one. If you ever took ballet, like even one class, you'll like this show for that reason too. A bunhead at heart!

I took more than one class. In fact, I took years of classes, so much so that I could've gone pro if that's what I had wanted. But no, I wanted something that paid more, yes, I wanted to be ... a writer.

So maybe I chose the wrong profession after all, or I'm par for the course. Whatever. The thing is, I completely relate to the main character of the show. This dancer chic, she had gone that route, and did what she wanted with her dance life: went pro. Only life sort of took over and she didn't quite end up where she thought she'd end up. She's a big city girl, empty and dead inside, now gone to a small town and becomes truly alive.

The writing  is pretty stellar. However -- and I know I may get a few comments on this -- I watched Gilmore Girls, and I liked that whole show too. But here's the thing,  no one really talks this way. And if you do know one person witty enough to constantly pull off this humor, then yay for you. But, to have the entire town talk this way? See, this is where I can't fully LOVE a show when it's like this. If only one character was sarcastic and snarky for snarky's sake, then great. This is the Han Solo of the show. We all need one of those. 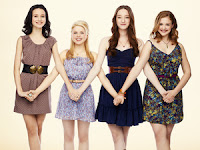 But when the ENTIRE town talks this way, geez, I don't know. It just reeks of  "Wow, look how great of a script writer I am? Isn't this super snarky of me?" It takes away from each character when they all speak this way. Sure, some snarkiness is to a lesser degree in some characters and others have more snarkiness, but I'm sure you get my point. Too much is too much.

Here's another point. In book writing, you can't have all your characters snarky, or super sarcastic. It DOESN'T ring true. It literally drains the character, each one, to where you don't know who said what. And if  one character says what could've been said by another, well, that's just a bad place to be in for both writer and reader.

I don't think it should be any different for television writing. I know. Television is fast. You've got what, 45 minutes of actual show that has to wrap up a problem, create new problems, show character growth, etc and it's got to go quick before the show is finished! And yet, I can't help but think it's a problem--it's shallow. It's pretentious.

Okay, having said all this, here's what you should (or should not) do.

1. Don't write this way. It's too confusing for the reader.

2. If you do write this way, you can probably get away with it if it's on TV.

3. Watch bunheads. Super cute, especially if you love ballet like me. I still dance, all the time ... at home in the kitchen. A tondue here, a piroutte there while I'm stirring the spaghettie sauce. It never goes away. I think I'll be 90 years old and still doing plies. Where was I? Oh yes.

4. Watch Gilmore Girls reruns. Hilarious. Very fun. Again, no one speaks like this, and everyone is so dang witty. But, it was entertaining enough for me to overlook this mega-problem.

Unfortunately, I couldn't overlook that mega-problem with the super-popular show House. I'm going to get flack for this one too. But, it was WAY too much, all the time. It's like a megaphone in your ear for the entire hour, shouting at you how fantastic (they think) their writing is.
﻿
﻿
Oh, and did I mention that I know a friend of a friend of one of the co-stars of Bunheads, but I didn't know this until after I watched two episodes? My sister went to school with the sister of this star, character Ginny Thompson. Yay for Bailey Buntain! Way to go. Watch new episdoes of Bunheads on Monday night 9/8 c, on ABC Family.

So, go ahead and watch this show. It's got a few writing issues that could easily be remedied, but overall, not bad at all. Heck, I would love to write for them.

Alrighty. Now, what's left? Oh yes, there is a pretty cool writing contest I must mention. It's the:

Fifth annual Life Lessons Essay Contest, put on by REAL SIMPLE magazine. If you could change one decision in the past what would it be?
Maximum word count: 1500
Entry Fee: FREE
Prizes: Essay published in magazine, trip to NYC, etc. Cool stuff.
Deadline: September 13, 2012

Have fun, and if you dance, make sure you grande jete before you write, you know, to get the blood flowing and all...