January 10, 2018
My neighbors, whom I've not met, just moved in across the street. I've no idea where they're from and was out of town when the moving trucks unloaded their things, and I don't even know if I've seen their cars. I don't know if anyone is there, actually.

But yesterday, they (I still didn't see them) set out some things for donation (they just appeared). The kind that is to be picked up by a truck, free of charge, to be resold for "reasonable" prices at a thrift store. So, someone must live there. 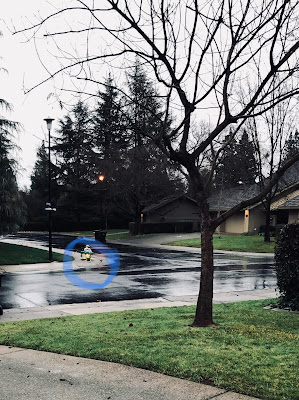 My new neighbors missed the truck by a half hour. I saw it winding down our street as I left at 7:49 to take my sons to school. And when I got back, a baby walker and a few bags sat by the curb. It was a little sad to see the forlorn baby walker without a baby in it, as though the baby just upped and walked away on his own.

It made me want to walk over to my new neighbors and meet them and tell them, "Hey, you're too late! You have to haul your stuff in until next time." But again, I didn't know them yet. And I suppose that wasn't the nicest way to welcome them to the neighborhood.

I definitely didn't know if they had a toddler (I assumed it was a toddler, hence the baby walker donation). But then I wondered if there was a baby. Or maybe it no longer lived there. Or maybe it was like Hemingway's short (short) story "For sale. Baby shoes. Never worn."

And so I went inside, hiding my eyes from the walker not wanting to know the truth and also wondering if I'd ever meet my neighbors, now that I've ruined my whole thought process over them.

I failed as a kind, neighborly neighbor.

But, I did get a good story out of it. Which I guess is a nice by product of my laziness. And being a writer.

**That whole short story of Hemingway's is an urban legend. There is no substantive evidence to prove he ever wrote it. That aside, and giving him the benefit of the doubt, have you ever tried writing a short story like Hemingway's? Like ten words or less? It's the whole idea behind flash fiction, which I adore because I think with words, especially in writing good words, less is more.**

Unlike Hemingway's, this story is all true.