October 27, 2010
I seriously thought about writing a blog post about my new dog. Because, hey, that’s a huge deal. A puppy is like a toddler. And a toddler, to any family, can be stressful.

But I hadn’t figured out yet if there was a literary angle to this potential puppy post; like if having a dog made me write better, faster or worse, or not at all since I spend more time training, feeding and playing with her than anything else. But I didn’t get to think that far ahead. The blog post wasn’t to be about my dog. Sorry puppy. 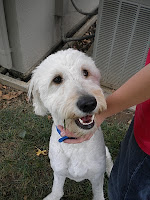 It was to be about the break-in at my house. Yes, it was the real deal. The thief entered our (locked) home, rifled through our things just hoping for something good. Fortunately for us, and unfortunately for him, we didn’t have anything valuable in the house, other than the kids, and they were both at school.

I’m sure he thought he would get in and out scot-free. After all, he had thievery down to a science since he’d just tried the same trick down our street minutes before. He parked his car in our driveway and that was key to breaking in (excuse the pun). If people see a car in the driveway, they think we know the person. Very sly.

He had to be on his way out when we arrived because when my husband confronted him -- after noticing not only the car but also two of our house doors wide open -- the burglar politely told my husband, “Sorry Sir, I didn’t take anything. I’m just going to leave.”

Yeah, um, when someone breaks into your house, and he calls you sir, it doesn’t change the fact that you want the idiot to be responsible for his actions! This is when my husband grabbed him and they wrestled all the way outside. The punk jumped our fences, grabbed his own wallet from his car (don’t know how he had time to think of that) and ran.

I got to make the wonderful 911 call. I’ve never called them before in my life. That was all for 48 Hours Mystery, or someone else. But I did it, and it was rather frantic. Afterall, I was watching my husband try to keep the dude from bolting, give a physical description, remain calm and talk rationally. Not easy.

The bad guy got away. But not for long. We positively identified him. Would you be shocked to know he was on parole for burglary? Yeah, mind numbing. The police are picking up the dummy as I write. On a good note: it was cool to see CSI at our house. Of course, it was nothing like the fake show. But still, very cool. All the police and sheriff were awesome too.

Lesson: Keep the puppy out of her kennel when we’re gone, even if it means she’ll tear apart her bed, rip up the doormat and euphorically pick apart my houseplant, leaf by leaf. My dog barks. That’s a good thing. Had she been out of her kennel, the perpetrator would’ve never come in.

Was it terrifying? Yes. Are we better prepared in keeping safe in the future? Yes. And for me, I already know everything works together for good. Even the bad stuff. Angels were watching over us. And most importantly, the thief didn’t carry a weapon. Had he? Well, this blog post wouldn’t even be happening. Oh, and if anything else good came from it, it’s fodder -- heck, nothing beats real life experiences-- for a great story.