September 26, 2013
So, I have this cute child. He's six. Tall for his age. And very much like my first born with his perfectionist tendencies.

While extremely responsible, and this year has been exceptional -- him telling me what homework he has the day before it's due; that he wants to take his spelling pretests with ABSOLUTELY no help from me, etc -- he forgot something really important the second week of school.

He went to school without his shoes. 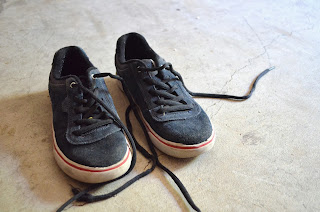 Okay, not the end of the world. I drove up to the "drop off" area, ready to expel my children to the world of learning, when I hear, "I don't have my shoes!"

He was so in shock, so scared I would be mad at him, that all I could do was say, "Okay. Wow." No way could I be angry. No way could I tell him that he seriously ruined my morning routine, that I'd be late meeting a friend for coffee, or that I didn't care. Because I did care. And my cute child is everything to me. On the good days. And the bad days.

What did I do? I walked him to his class in his stocking feet and went home to get his shoes.

Normally, this event really wouldn't have been so bad. But, as the "schedule gods" had worked out for me in advance, today was the day that I was already making three trips to and from home and school.

This little jaunt would make it a fourth.

I texted my friend that I would be a little bit late to coffee and began the drive home.

I so wanted to be angry. But, I literally couldn't. Like, I couldn't even muster up the frustration. There was nothing. I think I felt this way partly because I knew it would be fruitless. I mean, the kid is shoeless. And partly because ... did I have any control to begin with? By ranting and raving, I would be admitting that I thought I had control of my little day.

Clearly, I had none. God had it. And He made this concept known to me with my cute child forgetting to slip on his shoes.

1. I would be able to say hello again to my sleepy dog. She loved extra hellos. Okay. Good. Dog is taken care of. Check.

2. I would be able to get my cell phone. Yes, I had left my lifeline at home, lying on the counter, charging. Bonus. I wasn't alone! I'd be able to check my mail a million more times than I thought I would, seeing that I wouldn't been without it after all. Check.

3. Well, I was having a hard time with number three. Until I thought ahead. My fourth trip of the day would be in the evening, going from home to the school for Back to School Night and home again. While that was always a fun trip, meeting his teacher and all, the best part would be the jazz music on the classical music station that night.

I love Jazz. I don't know much really, but I do know that here are some real musicians in that genre. And because I don't have "satellite radio" in my car, I had to wait, as we once all had to do. I had to wait for Jazz until after 8:00 pm, when the classical music station turned to Jazz.

(No, we don't have a jazz station in Sacramento.)

So, the end of my day would be steeped in jazz, driving home to see my cute kids.

The thought of that made my little trip home like an appetizer. And the dessert of jazz music in the evening would make everything okay.

And my cute child would have his shoes ... just like everyone else.