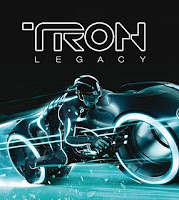 I went to see Tron Legacy today and it was about four thousand times better than I thought it would be. This was surprising because Hollywood has a way of resurrecting old, good things and remaking them into new, bad things.

This isn't to say the original Tron was top-notch. We're talking about a technological movie from the early eighties. How good can that really be? But after seeing Legacy in 3D at IMAX, let's just say I was impressed. Big time. Normally, I don't recommend movies. But, this one was different.

Now, I've already mentioned in an old post that you should never begin writing after having watched a movie and I am not encouraging that here!  What I am encouraging is for you to see what a story -- a good story -- is all about, and how it might just help you with your writing too.

Maybe it was because I hadn't seen a movie in ages, or was getting over an illness. Or maybe it was because the movie brought back fond memories of my youth. Regardless, glowing lights in a digital world filled with motorcycles, sweet fight moves and a decent dance track was something that left me wanting more and wondering: How old will Jeff Bridges be in the next film?